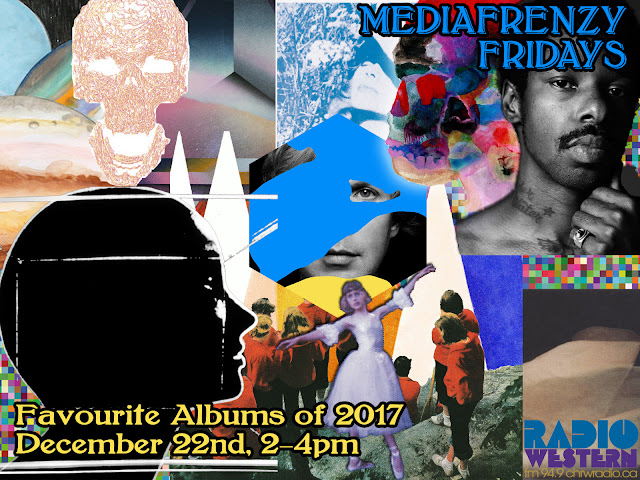 Here, in convenient list format, are my favourite 20 albums of 2017. Take the numerical order with a grain of salt because it was very difficult to place these in any sort of order. They're all so different and are strong in their own unique ways. These are the albums that I listened to the most, thoroughly enjoyed and/or were a big part of my year. It's a very personal list, not necessarily a list of 'the best', albums released, but a list of 'my faves' Please comment below with albums you would put on your list!

Canadiana alt-country rockers The Sadies never disappoint. I was able to see them play (for the umpteenth time) this year and the live performance is always full of energy and talent. Their 10th album, Northern Passages dishes out a good serving of brooding melancholy and psychedelic twang.

Quirky, dreamy and dancey, this record goes all over the place.  While not as blissfully chill as his previous release, 'Paracosm', this album grew on me with repeat listens. I wasn't initially a huge fan of the album artwork, but I do adore this stop motion collage video.

Danish shoegaze duo The Raveonettes released singles throughout 2016 as an 'Anti-Album'
which was finally released as a full album in 2017. Most of these songs are about breaking up, letting go and moving on. While my fave album by them, 2011's 'Raven in the Grave' had many tracks about love, strength and energy, this record is all about the polarized end of such relationships. Love and loss. That's 2017.

While I could critique this album as being a little too much like Jamie XX's solo project, perhaps a bit more electronic compared to their last release, Co-exist, it still definitely makes my list. The songs are very pretty and dramatic. It's an album that really grew on me, with beats and beauty, romance and heartache.

I adore half of this album and the other half I wouldn't mind never hearing again! It's long and all over the place. Give me Record 2 of the set and call it a day. Still, it makes my list, mostly because of the Mavis Staples/Pusha T track and Benjamin Clementine's 'Hallelulah Money'. Honestly though, for the next album, can we just get more Gorillaz/Damon Albarn and less trendy special guests. Please and thanks.

My 2nd favourite Russian band is back with another record. I enjoyed the last one so much I ordered it as soon as I heard the news. On gorgeous minty green vinyl, Tschak! holds no bars. It's a messy, groovy, sweet, noisy, psychedelic trip. This band from Perm, Russia blends guitars, vox and electronic synths to take you places, far away places.

Not sure why, but I loved this release way more than 'Hot Dreams'. I know not everyone will agree, but that's how I feel. This album has some amazing nostalgia in the song structure and melodies. I hear them channeling Iggy Pop and Bowie in these tracks. Awesome music video for 'Grifting', too.

Also my favourite local release of 2017, You'll Never Get to Heaven's 'Images' is a dreamy soundscape of electronic delight. The London based duo has made a spectacular record.

All the way up in Northern Ireland, The Hard Chargers have been rocking the UK scene for nearly a decade. I caught their ruckus bluesy show at Sweeneys in Dublin and been a fan of the band ever since. Here's a video I took of one of the tracks off the new album. I supported the Kickstarter campaign for this CD and had it sent right to my home, but it actually wasn't officially released until January 2018.

A bittersweet posthumous release by the spectacular Miss Sharon Jones. What a treat to hear these songs that were recorded before she passed away. The Dap-Kings nail it, as always. It should probably be higher on this listen tbh. Rest in Power.  <3

Ontario band Pick a Piper play rhythm based dance tracks, with synth melodies and drum beats to get you on your feet and moving. Their high energy live shows are a blast and the album is solid all the way through.

Slowdive's first release in 22 years! It's a beauty. I'm a new fan of the band and really pleased with this album. #onlyloversalive

Great live show, great album from Toronto band Alvvays. I got to see them at Rum Runners this year. So much fun. Best album name of the year too, imo.

Catchy, fun tunes all the way through. I heard this album late in the game and it wasn't until I heard the whole thing that I realized how solid a release it was. every song is really good. Plus, this video is super rad.

Strength, passion and musical talent abound in the new album from Algiers. My favourite description comes from a Youtube commenter saying "It's like post punk meets Motown in a post apocalyptic nightmare." Yep. 2017 needed this album.

Down to the top 5 of 2017! Wolf Alice's "Visions of a Life" delightfully mixes genres. There's a melodic song, a indie song, a punk song. What do you want? This has it. I'm not sure if it can beat 2015's "My Love is Cool" which was my favourite album of that year, but it's damn good.

Toronto based electronic duo Honey Beard's "Dreamless Sleep" is their debut full length album.  Their aesthetic and live show are both too cool. Danceable beats and dreamy themes.

Ooh, down to the top 3! I adored Sufjan Stevens, Bryce Dessner, Nico Muhly & James McAlister collaboration "Planetarium" Mercury is my favourite. There's also a fantastic live studio video of this song, check both out. The piano, the strings, and Sufjan's gentle vocals: It gives me goosebumps and makes my heart happy and sad at the same time. sigh.

#2 of my top albums of 2017 (basically tied for #1 it's so good). Spoon's "Hot Thoughts". Guaranteed to put me in a better mood, I never get sick of it, despite many repeat listens at work, at home, on my radio show, even mainstream. I don't mind. Play that song again!

My favourite album of the year is this soulful gem, 'Face Your Fear by Curtis Harding. A staff favourite at the record store too, I must have recommended this album to a half dozen people who bought it flat out on my praise for the tunes. I spoke very highly of it and for damn good reason.


I joined Westminster Park in 2016 and we put out an album in July 2017 called Fig. 4: Molt, Rebirth. It's an album about metamorphosis and change, something 2017 was rife with. I am very proud of the release and while I couldn't very well put it on my own top list (or could I?), I needed to mention it, because after all, this is a list of albums that had the greatest effect on me in 2017 and this one sure did just that. I played drums, flute, harmonica and back up vox. The process of recording drums is not my favourite pasttime, but the experience was priceless.

What was your favourite album of the year?

Posted by msmediafrenzy at 3:04 PM No comments: